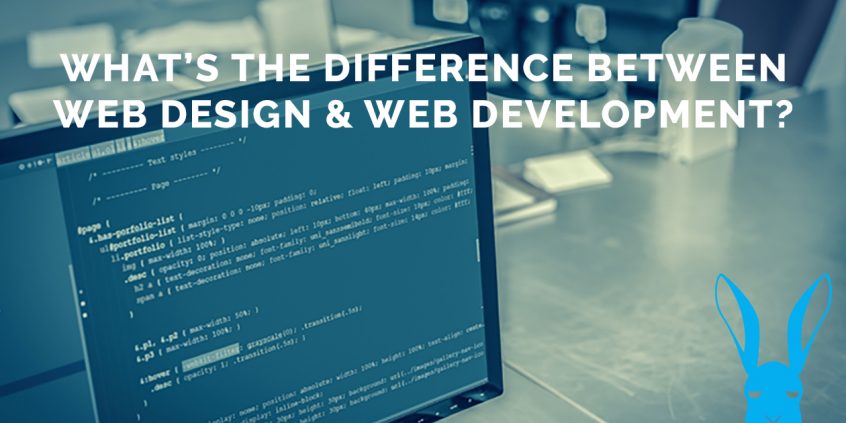 In a world where literally everything is online one would assume that the difference between Web-design and Web development would be common knowledge. However, it seems that as more and more people are searching for these services, confusion has only grown. Despite overlaps in the services that these two different types of developers provide, there are distinct and important differences between the two. Differences which are useful to know for when you are looking to recruit for your next digital project.

Web designers are responsible for most of what you see when you visit a website, they create the aesthetic, the feel and the usability that you experience when interacting with a website. It is the designer's role to take a project and bring it into reality, in an engaging and visually appealing way. They create the blueprint which developers later build from, using a wide profile of skills to ensure the most seamless possible experience for the customers.

Whilst, web designers rarely interact with code, the importance of a good designer should not be understated. Whilst web developers are responsible for the functionality of a website, it is the job of the designer to present that functionality in a way that people actually want to use.
It is easy to see web design and the less technical brother of web development, but this is not the case. A well-planned and perfectly optimised website design is just as essential for the success of a website or application as a particularly innovative string of code. This the importance of web design fully understood, developers have a portfolio of skills they deploy in order to ensure consistent quality in their projects.

Where web designers are responsible for the actual feel of the website, developers are more focussed on actually creating the substance. Using programme languages to develop the infrastructure that facilitates any function or process users may interact with. Unlike designers, developers have specialised into two separate sub-groups, Front-end and Back-end developers. It is through this specialisation that much of the confusion between web designers and web developers have emerged.

Front-end developers are responsible for the part of the website that customers interact with, they use their own unique times of programme language, such as HTML, JavaScript and CSS. Each of these languages has a specific function, understanding what these functions are is a great way to get a better understanding of the differences in the roles of developers.

HTML: This form the foundation of the website, it is responsible for the actual structure, content and layout of the page.

CSS: This is slightly more advanced than HTML, it determines how the HTML is displayed on the website, this is ultimately what gets cleverly manipulated by web designers to create the visuals that you see when you click onto a webpage.

Javascript: This is where it starts to get more complicated, JS is used to add more complex functionality and features to your website. As well as create applications and animations.

Through these tools, it is possible to create a functional website and in fact, as they evolve and become more capable, more and more websites are relying on these front-end developers to do most of the work. There is a lot of potential overlap here and for some traditionally front-end applications where Javascript is not appropriate a backend developer, proficient in a project-specific language is required. Complex and resource intensive web applications such as Content Management Systems are an example of this, using languages such as Ruby and PHP a specialised developer often collaborates with a front-end developer to create an application that works within the framework established by the front-end developer.

Generally, Back-end developers specialise in functions that control server data and requests. Essentially, wherever a website intends on handling, saving and repurposing data it will require some form of backend development, often in the form of a database. These Databases require a direct connection to the server itself to the website, it is the job of the backend developer, using server-specific language such as PHP to create a protocol which allows for the maintenance and utilisation of this data.

Despite all the confusion surround web design and web development we can see that these terms describe largely different occupations. Whilst distinctions within the web development community are becoming blurred as traditionally front-end languages become capable of increasingly advanced functionality. Web development as a whole remains largely different as a matter of substance. For SME’s looking to embark on a new software project, or perhaps wanting to undergo a digital transformation it is worth looking at what you hope to achieve before your start recruitment. Generally, both web designers and developers work in harmony to create a functional and useable website, however, an understanding of the different types of specialists within the software and web-creation community will give you more control when planning your next project.

At Hare.digital we are specialists in both web design and web development. Bringing both sides together to achieve optimum results. This means we are able to deliver a consistent level of quality throughout the entirety of your project.