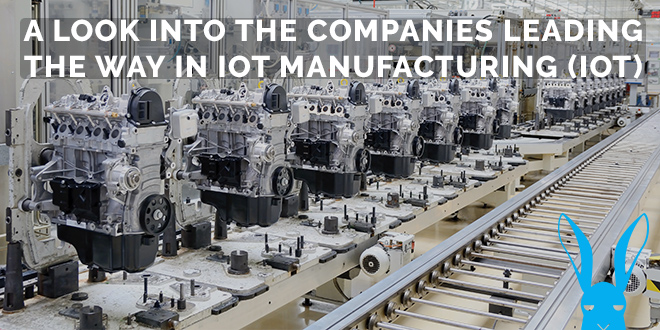 A recent study, the Industrial Digitisation Report, found that there are already 6.4 billion data-communicating objects around the world and forecast that number to balloon to around to 20 billion by 2020, a 128% increase in just two years. Perhaps even more impressive are the financial numbers. MarketsandMarkets claims that the industry will expand from the $170 billion-dollar business it was last year to being worth over half a trillion dollars by 2022. It is no surprise then that the race to lead the IoT market is heating up, and such we’re taking a look at the companies leading the way at the moment in IoT manufacturing. Although IoT will create an era where the digital and the physical will be inseparable this article will just look at the physical side of manufacturing.

We’ll look not only at the bigger companies involved in manufacturing but also some of the smaller single product manufactures hitting the markets right now. We’ve hand-picked a selection of IoT products demonstrating the wide range of applicable uses that IoT technology has for the consumer, ranging from kitchen appliances all the way to medical devices.

Due to the focus on physical manufacturing companies that solely provide wireless carriers, servers or build IoT platforms won’t be included. It’s for this reason that you won’t see the likes of GE, Microsoft, Hitachi or Dell on this list but who will, no doubt, be imperative to IoT and its future.

Whatever the applicable use, IoT technology is sure to revolutionise not only our working routines but our day to day life. To find out more about IoT technology and how we can help you develop your IoT capabilities get in touch via email at [email protected]