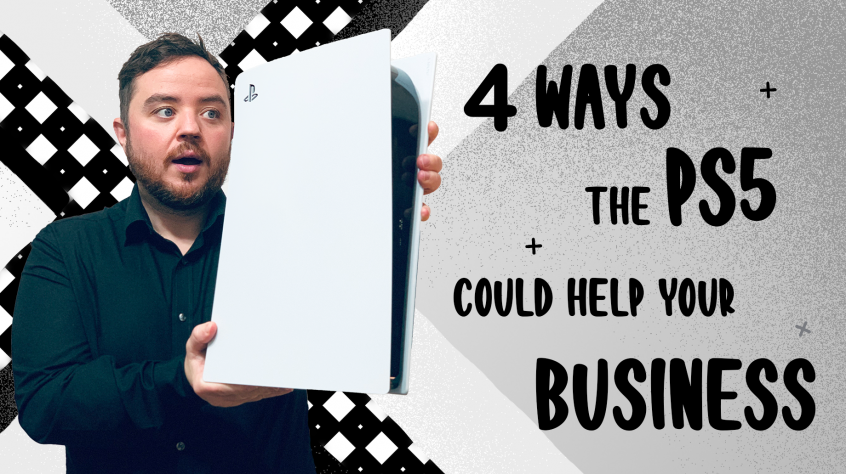 4 Ways The PS5 Can Help Your Busines

So the PS5 has arrived, it's the next iteration of a gaming console that comes around on a seemingly generational cycle. This one introducing Ray tracing and SSD's but if you want a tech review, you'll find plenty on youtube. No, I'm interested in explaining what the PS5 can teach us about business.

The PlayStation story, it's an interesting one, it feels kinda personal to me and perhaps to my generation as a whole. I'm going to tell you 4 ways that the PS5 could teach us about business.

Lesson Number 1: I grew up with it

As a millennial, I've grown up with the PlayStation. It's been a part of me throughout my formative years and now as an adult, it's still pretty exciting to get one. Not only that but it was something my brother and I used to play together. I even won the PlayStation 2 in an online competition. There's so much history there and it definitely inspires nostalgia within and that's hard-wired into my reward centres or in science-speak my hypothalamus which releases that feel-good hormone, dopamine. The PS5 understands this and tries to really build on it with the PS5 demo game. Astro's Playroom. Not only does this serve as a help guide for the new haptic controller, where you can feel when you're in water or sand adding a new layer of immersivity. But there were noises and graphics of PlayStation classics over the years littered throughout the game.

Now if we look at another brand that takes on this approach, Microsoft offers schools and students free office. That's not because they are being philanthropic but because they want us to adopt their technology as early as possible as they know when they go to work they will use what they've used before.

Lesson Number 2: It feels a part of me

When I pick up the controller it just felt right, like years of gaming history has moulded my hand into the perfect PlayStation operator. That's not a coincidence, they've done that on purpose, along with keeping the buttons in the same positions and the refreshed user interface still familiar.

These skills have been learned through years of use and make us feel at home with the product, reducing frustration and mental fatigue from learning something new. It's intuitive. It just feels a part of me.

Amazon is a good example of how other brands do this, their website interface hasn't changed much over the years even though they are a trillion dollar company. That's because people don't like change and if it doesn't feel right they won't follow their gut which is a big indicator for buyer intent.

Owning a PlayStation console for so long means I've invested thousands of hours into the platform, throw in all the games and accessories that I've bought and my game progress on top of that. That's a lot of energy and money right there. I've also built a community with the console as the figurative hearthstone, with all my friends using the same console. And what about the gamifying factors, such as all those trophies and accolades that I've accumulated.

If I moved to a new console, I would lose all of this. Let's face it that's never going to happen. and this is what you call an ecosystem.

The best ecosystem is used by 30% of smartphone users in Europe, they're called Apple. They are the masters of convincing you to stay with the apple family. Their products have this ability to dial in FOMO Fear of missing out within humans, if you don't use Apple then you won't get all this extra functionality across all your devices. Apple works better with Apple, and it's a compelling message.

Firstly, what is guerilla marketing, and no it doesn't involve gorillas. It's a type of highly unconventional marketing that raises brand awareness by doing something out of the box. This out of the box thinking often creates a virality around it. Which gets people sharing your content without spending marketing dollars on it.

Sony's marketing campaign for the PS5 sums this up really well. They replaced the oxford circus tube station signs with their iconic button symbols. People have been sharing that on all the social media platforms.

Tesla is another create example by using their sister company Space X to fire a Tesla into space on a necessary rocket test created viral content to be shared.

To be honest PlayStation's marketing stuck with me since the release of PS4. Remember point 1 about growing up with it. Well their PS4 video was all about invoking nostalgia following a stereotypical PlayStation owner through his life as he got older with the London skyline as a visualisation of time passing by.

- Find out where your future customers are and get them using your product early.
- Make your product simple and intuitive so it feels a part of them.
- Create a product that is incredibly sticky, whether its vital to their business or is a core part of an ecosystem
- Do some out of the box marketing that gets people talking about you.

Now I think the PS5 will be the last generation of console. In my next video, I will be telling you why and how it will change business models as we know it today.